Last year our team almost tripled in size. We went from 6 people to 15 people including developers, designers and devops. While it was great to see the team grow we faced problems we never had as a small team.

The whole team is working on a single project (Skroutz) so partitioning the workload vertically is not a solution.

In the past we’ve tried various solutions to manage every day development, as well as the development of new features, but in vein. The problem was that we mainly focused on tools instead of focusing on the process.

Some while ago I stumbled on a blog post by Uservoice about their development process (15 minutes read but worth it). In this post they explained how they use Trello and Google Docs to further develop Uservoice.

We’ve used Trello before but since we were too focused on the tools we missed the whole point. So we decided to give it one more shot this time treating tools as only tools and focusing on the workflow.

The goals were simple:

It is important to note here that every team has different needs and there is no one-size fits all solution. We experimented with UserVoice’s solution and ended up in a solution that fits our team’s needs.

Our process moves around 3 different boards (explained below). There are cases that we create new boards (e.g. for a long running feature), but these boards serve as a feeding mechanism for the Current Development board. 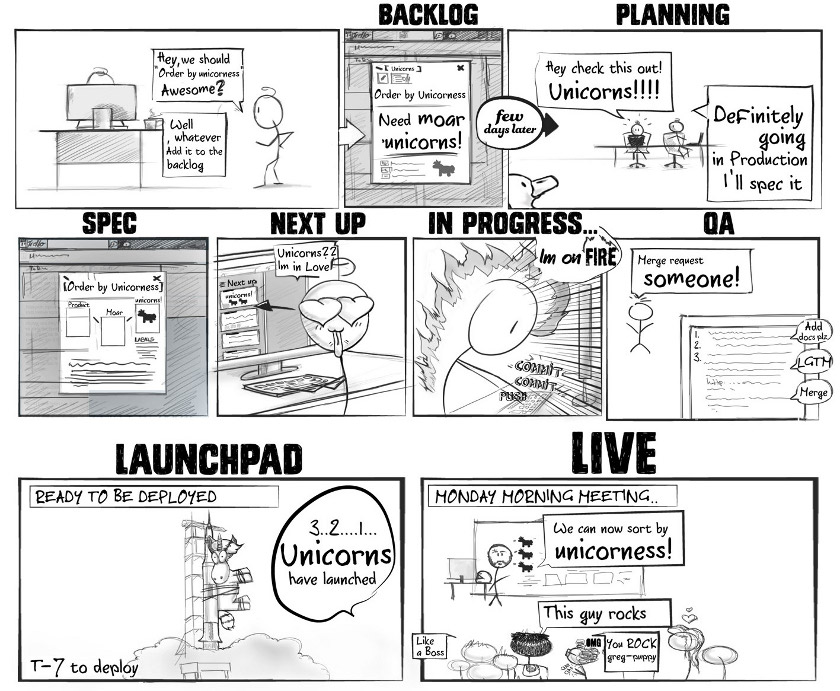 This board is where every new request is added. List represent parts of our code base or infrastructure. Who ever adds a new card is responsible for adding a short description of the bug or feature request.

Every Friday we pick a list of cards from the BackLog and transfer them to the Inbox list of thePlanning board. Which cards get moved has to do with our roadmap and the severerness of the request. Planning has 4 lists: Inbox, Design, Spec ,Ready.

Inbox contains a list of the features/bugs we have decided we want to work on. Depending on the nature of the request and how well it is described it will hop to another list in the planning board.

Design holds cards that have a visual design phase. The creative team maintains a different board for their tasks but we keep cards in the design phase to maintain their progress status.

Spec holds cards that need a specification. This specification maybe as simple as a one liner fix or a whole description of a feature with wireframes, proposed object structures etc. Spec`ing is a task by itself in the sense that investigating solutions for bugs or designing new features is handled by the team as a “todo”.

Ready contains a list of cards that are spec’ed and ready to be moved to the Current Development's Next Up list. It’s just a matter of prioritization.

This is where most of the magic happens. The workflow consists of five different stages: Next Up, In Progress, QA, LaunchPad, Live.

Every card in the next up list is a fully speced -ready to be implemented- feature or bug. The card should contain enough information so that anyone from the team can pick it up and gradually deploy it.

Team members examine cards in the next up column and are encouraged to pick anything they feel comfortable with. Prioritization is not an issue here because priorities were set in the Planning phase.

Consider an analogy from a car factory: A card is a cardboard box containing an assembly manual and all the necessary parts required to assemble an engine component. The assembly manual compilation and the gathering of the engine parts happened earlier probably by another engineer (or the same one that will complete the task) in the Planning phase.

After the team feedback the author will make any requested adjustments and make sure Kowalski is green. (Kowalski is our distributed CI tool). If all looks good the card is moved to the LaunchPad.

A card in the LaunchPad list means that it can be deployed any time. In some cases deploying needs a little more effort than rap production deploy (rap is our capistrano janitor, more on that on a later post). Most of the time features/ bugs are deployed the same day (maintaining a project velocity is very important). There are days where we deploy 20 times or more.

When a feature / bug has been deployed the card is moved to the Live list where it will stay until the author talks about it in the Monday morning daily standup.

As mentioned earlier Trello (or Gitlab or any other tool we use) is just a facilitator for a set of actions and processes that enforce the desired workflow.

Every day first thing in the morning we do our Daily Standup meeting, only we remain seated due to office space limitations. In this meeting, which lasts 5 to 15 minutes depending on the day, each and every member of the team talks briefly about what they did yesterday and what they are going to do today.

The Daily StandUp is essential to keep the team well informed since one of the goals of the whole process is to distribute the knowledge among all team members.

The next day someone may throw a merge request at you and it helps if you are informed of what that someone is trying to achieve.

Also team members that have heard of a deployed featured or a clever hack or a well known problem are more likely to identify a similar situation when they come across it and take advantage of the already implemented solution.

If you’ve been around long enough you’ve surely seen a lot of reinvented wheels mostly caused due to poor team communication.

Every Monday morning the stand up takes a little longer than every other day and there is a reason for that.

We review the Live list in Current Development and team members speak for the tasks they completed, the problems they encountered and how they solved them. We usually talk about major bugs and features, minor stuff goes up in the Live column but we don’t talk about them.

Monday Mornings are causes for celebration. While the team was productive before, it’s easy to think you are doing nothing all week and lose morale. I’ve seen it happen with myself and I had to go back to my mind maps and strike things out to make sure I didn’t throw away a whole week.

The points listed below are a set of “unspoken” rules and best practices. Breaking them will not hurt the process but it’s a sign that something is wrong.

It’s been about two months that we are actively following the described process and we’ve seen a big improvement in our daily work. Apart from having a fixed set of tools that we don’t have to worry about them all the time, we also had some huge gains:

BTW we are always hiring. If you like what we do here you can drop us an email at admin at skroutz gr.